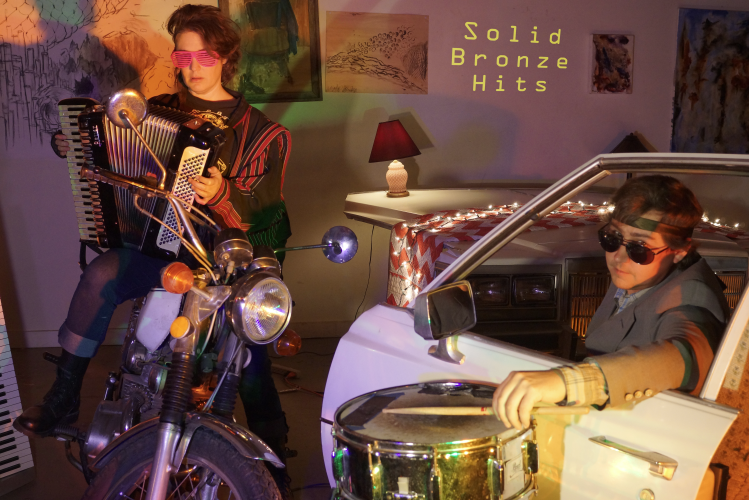 I approach the Common Room bar, quietly perturbed that this gig may be a little esoteric for my mildly mainstream-leaning self. I needn’t have worried.

I receive a cheery welcome from one of the amiable bar staff, which sets the tone for the rest of the night: familiar, intimate, joyful.

A small crowd of revellers mill, and the chatter indicates the people here have seen Rosie Langabeer perform before and know they’re in for a good show. The artist herself, New Zealand-born but Philadelphia-based Rosie, mingles with the group while clutching a bowl of her mum’s vegetarian soup. She gives me a cookbook tip and wears hiking boots with her dress.

On stage, Rosie alternates between accordion and keyboard. Drums are played by Robbie Beamer from Tennessee, whose other job is making funny skits. The songs cover an incredibly broad range, especially considering there are only three instruments involved.

French love songs evoke a feeling of 1930s Paris. Pirate songs are bracketed with the throwing of doubloons (aka foil-covered chocolate coins) to the audience. An original and supremely creative medley samples an eclectic mix including Destiny’s Child’s Say my Name, Simon & Garfunkel’s Cecilia, The Exponent’s Victoria and Mellencamp’s Jack & Diane (you may notice a theme there). A cover of Some Velvet Morning has a touch of The Door’s This is the End about it, whereas a rollicking rock beat – described as surfy pirate music – wouldn’t sound out of place on a Tarantino soundtrack.

It’s not the last time I’m reminded of Tarantino – the set includes a cover of Captain Kangaroo.

The performance is almost a revue. Rosie chats away between songs, easy and comical, with both the audience and her co-performer. Her energy is entirely infectious and she emanates pure joy while indulging her creativity on stage.

Other tracks include renditions of Sia’s Chandelier; Tom Waits’ Diamonds & Gold – decidedly less grim than the original; a toe-tapping Gutter Black; and a very fun Shame and Scandal in the Family with its calypso beat and themes of incest and infidelity.

Rosie’s voice is clear and strong, her proud Kiwi accent juxtaposing pleasingly with Robbie’s American-accented harmonies. Robbie’s drum skills are better demonstrated in the second half of the show when he gets to let loose on tracks like Being Alive (aka the Bee Gee’s Stayin’ Alive) and an on-the-spot adaptation, Wipe Me (aka The Surfaris’ Wipe Out). The pair’s rapport and concord are obvious, and their creative and occasionally improvised lyrics are hilarious.

By the end of the night, several men have shed their self-consciousness to perform some experimental dance moves. The audience has laughed, toe-tapped and been transported variously to the high seas, Italian osterie and fair old Auckland-town. I leave with a sense that I’ve spent the night in the company of good friends, despite having arrived alone.