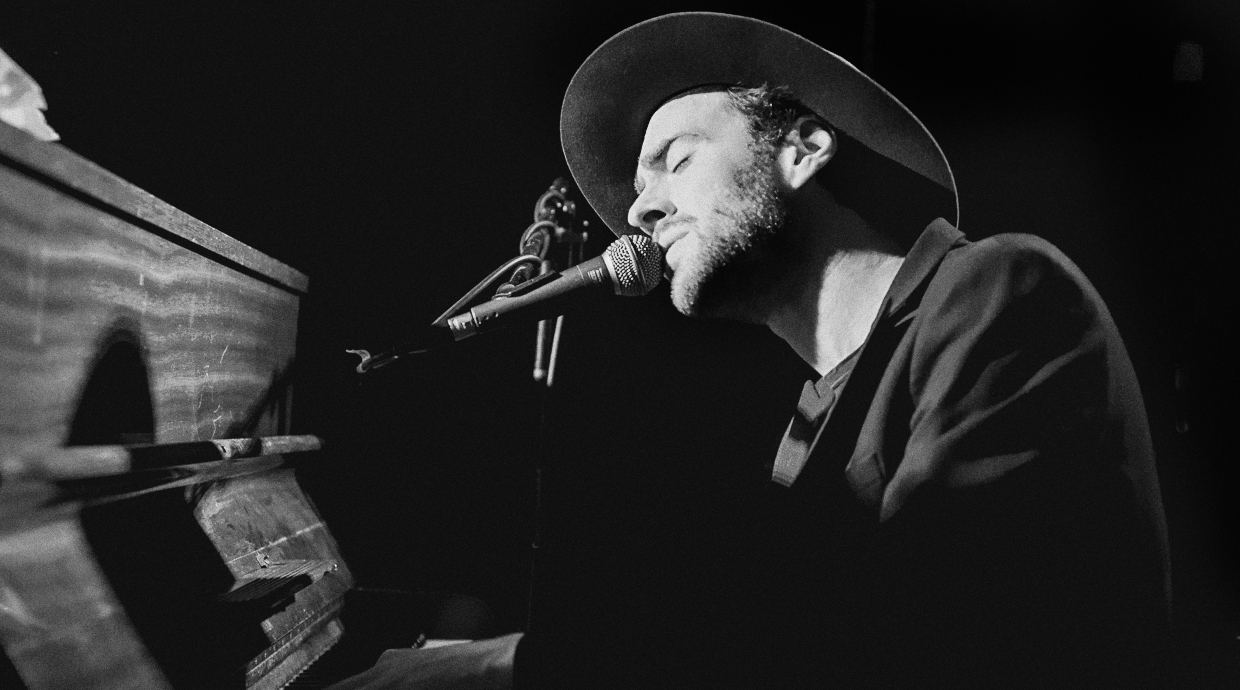 Reb Fountain has kicked off her shoes to sit down at the grand piano, lugged in by the Haumoana voluntary fire brigade some hours earlier. She’s just sung an exquisitely poised rendition of ‘Blue Smoke’, and its nostalgic hold and historic import feels somehow significant as the rest of the country bands together in vigils and commemorations for Christchurch. It’s towards the end of her set (which marks the first half), and the community hall is filled shoulder to shoulder.

Reb is held by the attentive focus of Dave Khan’s masterful accompaniment (whether bass, piano, drums), and we are held by their dynamic and by her. There’s nothing passive in this, it’s a state of alertness. And by shucking off formalities (the shoes, for instance) she invites us into an intensely shared, perfectly paired, intimate performance. I am squeezed so close to my neighbour, I can feel the rise and fall of his breathing, the warmth of his skin through a fresh-laundered T-shirt – visceral, human details. A gust of cool air through the dark, open windows. She sings ‘Don’t you know who I am?’ and I feel almost tearful. Isn’t that what we all want, to be recognised, to be seen, whatever our faith or political beliefs? Isn’t that what the terrorist was ultimately seeking in the most fucked-up way?

Reb draws us through her songs, her singular voice and charisma into the terrain of our own emotions, and the landscape of human fallibility and experience. It’s a relief to find a language for unarticulated sorrows and that sweet sense of hope and catharsis that live music brings.

From the beautiful opening of her newly released song ‘Faster’, to the “amazing!” delivery of ‘Gold’, to her generous offering of ‘Lighthouse’ (“for making sense of the world”), Reb proves she’s one of NZ’s best folk performers.  Though she doesn’t have to prove herself here: “We love Reb,” is the simple consensus.

Finn Andrews (of The Veils), who has just played Womad with a five-piece band, is touring his debut solo album, One Piece At A Time. He’s dapper and clean-cut: suit, hat, nice, shiny shoes. Sincere. A self-confessed ‘outsider’ (having grown up between the UK and NZ), it appears he’s most at home within the songs he “inhabits” tonight – of love and heartbreak, death, and childhood obsessions.

Built from simple structures, the songs centre primarily around the piano, but their artful arrangement and the space between and within notes allow for a gorgeous layering of musical textures and evocative depth. They come handsomely alive when the strings are brought in (Emily Giles, cello; Dave Khan, violin), Reb’s backing vocals (so subtle in touch as to seem somewhat under-utilised), and the energetic play of drums (Joe MacCallum).

Finn’s a talented songwriter, with a great ear for a lilting, catchy, timeless-appeal tune – ‘Stairs to the Roof’, ‘A Shot Through the Heart’, his “anti-bird song”. There are immediate, achingly familiar-feeling harmonies, obvious comparisons and leftfield associations (my brain throws me songs like Marillion’s Kayleigh… there’s something lovably ‘80s here), while at the same time an intriguing originality that can’t quite be pegged.

The opening chords of ‘Hollywood Forever’ echo those of a German lullaby ‘Schlaf Kindlein, schlaf’ (sleep, baby, sleep), while subverting them in its sweet melancholia (“childhood dreams are seldom as sweet as they seem”) and meditation on death. This followed by the piano-slapping, foot stomping, hard drum of ‘Hold on my soul’ performed in the most fantastic committed frenzy – “who needs the devil when you’ve got the lord” – more than a little Nick Caveish. It’s a thrilling juxtaposition, a gothic interlude between grown-up lullabies. Finn smiles and goes back to sipping orange juice, soothing us with a tender song, ‘Don’t close your eyes’.

We are respectful: quiet in our listening, loud in our applause (the model audience, I think). Finn receives a standing ovation. There’s a trail of encores.

The verdict: a beautiful evening – fully expressed, almost holy in its humanness, most definitely a balm.