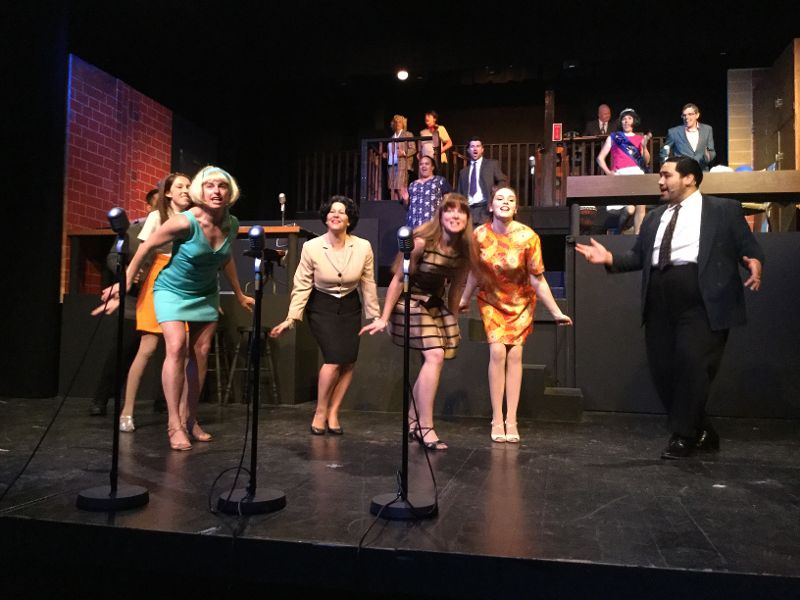 Set in radio’s golden era of the 1960s, when parents were worried about radio drama being a bad influence on their children’s young minds, and music had entered a time of cultural expansion that cut through many social norms and taboos, Amanda Stone’s A Great Face for Radio cleverly captures this global evolution in a highly humorous and vivacious manner from a ‘behind the scenes’ glimpse of NOP – a local New Zealand radio station.

Originally set in the 1950s, director Wendy Revell reset the script and music into the 1960s. This union of two talented individuals resulted in a play that left my cheeks sore at the end from a combination of laughter and smiles. Needless to say, I loved it.

The characters are brilliant. They are all there. Each persona represents a classic character-type you would find in a stereotypical 1960’s radio studio. From postulant ladies’ man DJ Gary Gusher played by the highly energetic and handsome Stephen Evans, to Beryl the tea lady, whose  archetypal ‘tea lady’ nature was brought to life through the intoxicating talent of Ali Beal. The serious and stressed-out producer played by Martin Good, who is well-qualified for this role with a 25-year radio career behind him, and one of my personal favourites, the glamorous newly crowned Miss Taihape played by Victoria Logan, who shared her money-saving tips for the modern housewife and relationship advice as the agony aunt of the airwaves.

The selection, quality, and musical arrangement of the songs was fastidious. Each rolled eloquently into the next, each having as much punch as the last. The song choice featured both solo and group assemblages which were attractively choreographed. Sixties classics such as ‘These Boots are Made for Walking’, powered out by Carlee Atkins, this performance being her first step into the theatrical limelight, and ‘Great Balls of Fire’ passionately sung by the multi-talented ensemble, were just two of many great songs. The audience were rocking in their seats, joining in with the chorus and eagerly awaiting the next installment.

A highlight of the play for me that demonstrated the ability of the cast, was a seamless, and professionally acted scene that focused jointly on some core aspects of classic 1960s radio. The scene was set around four separate radio programs. The gardening guru, a cooking extraordinaire, the storytime lady, and actors performing a British detective drama, who were simultaneously pre-recording their shows. Unknown to them the mischievous tea ladies, Beryl and Ida, had snuck into the producer’s booth and had started playing with the dials and buttons. This resulted in the audience hearing snippets from each of the shows. These snippets were intelligently woven together into a hilarious dialogue of slapstick comedy. The theatre was filled with laughter!

A great evening out in Napier’s Tabard theater. The play was uplifting and satisfying. If you love sixties music and great acting, you cannot afford to miss this offering.

One thought on “A Great Face for Radio”